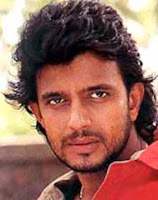 with bated breath I anticipated Ram teri Ganga maili kind of paisa vasool stuff but all in vain as our Mithun Da jumped from the fifth floor of the building to save her. (I still think! Wat da hell he was doing on the 5th floor and y his name was not registered in Guinness Records after all he has broken the record of Sargei Bubka). Suresh Kalmadi should rethink Dada's candidature for long jump and high jump in coming commonwealth games.

Dada pulped Shakti and his friends with new form of martial arts which can even give complex to Jetli( Fascinating fact: Mithunda is also a Li…..???? Bengali)

This was enough to lighten the spark of love in Mandabikini’s heart and within a minute’s exchange of the 3 words ILU both were in switzerland singing Anand Bakshi song with the maha romantic voice of Mohd.Aziz(Munna) and Anuradha Paudwal.The scientists are still working hard to know the secret of transpacing within seconds from Mumbai to Switzerland.

After college scene Mithun Da reached his home which was in a slum area. Nirupama Roy who played the widow mother of the hero was very ill and use to sew clothes of the mohalla wala while her healthy sister played by Tanvi Azmi is unwed and doing bartan kapda for her time pass. Both of them wearing old faded and torn clothes but our hero Mithun Da’s eshtyle resembles him to Prince Charles.

After the lunch, Nirupama Roy’s started coughing on a very high intensity and the frustu sister offering last few drops of Glycodin(khasi ke liye to bas glycodin) which failed to stop the asthmatic attack. Doctor (Iftekhar Khan) came and after examining closely to same aged Nirupama Roy with his sexothoscope
the doctor ask Mithun to came outside and says

The film continues in the college with the middle aged hero with his shaved side locks (Apna Bengali Mithun Da) sitting in the Hindi period with his 4- 5 friends who are majorly failed actors like Rakesh Bedi(I am astonished that he is still playing the same role) and the teacher(Krishi Darshan wale uncle) as usual teaching Hindi and the subject was Prem(love).

The villain was apna AAU guessed rightly Shakti Kapoor whose father Pinchu Kapoor was a big business man and a trustee of the college thus Shakti has the right to create any kind of nuescence with his group of mawali’s in the college campus.

Heroine (Mandabikini) is a daughter of a very rich father (Ramesh Deo) and a very proudy girl who use to wear a high heel sandal and a frock which is just above her mind sorry knee. Her deep neck was the USP of the film and the reason for her selection in the movie. The hero has a crush on her but she hates him as once her big Fiat NE118 damaged the Atlas bicycle of our poor Mithun Da and he insulted her when she offered a couple of 50 Rs. note to repair it.

To make his Dil ki Rani he also sung a song “aapdi ki topdi toti ke baan hai meri amma 18 baras ki chokri jawan hai meri amma” (thanks to the lyric writer mixing African ascent and words to make the song spicy.). All his friends including Rakesh Bedi sychronising all the typical steps of Mithun Da in the back giving complex to our 26 january P.T.rehersal.