“I convince my soul, be tranquil, and wait without hope
For Hope would be hope for the wrong thing….”

Above these lines are very relevant when I talk of my golden olden days of Kirandul as I know that they will never come back again and the only thing left would be nostalgia.

Coming back to ‘newbaatein’ lot of my friends asked me why I used this title for my blog instead they suggested me ‘old baatein’ as I usually write on my childhood and school days memories.

Yesterday,I with my beloved wife went to satyam talkies to watch Priyadarshan’s ‘De danadan’ after a small struggle for tickets we entered in to the theatre. With series of colured dim lights, the theatre was struggling hard to conceal its age. The chairs were torn and the atmosphere was depressive.

Being a hardcore fan of Akshay I convinced my wife for Dedanadan instead of her choice ‘Ajab prem ki ghazab kahani’. After few minutes the film started,  the depressive ambiance vanished and a chilled atmosphere taken over.

Starting with few good scenes moving around a kidnapping plot, the movie starts going in to various opposite directions with a desperate plea to make you laugh. Post interval it looks like the director and the whole unit somehow lost their original script in the transit and just went on the shooting as per their outdoor schedule.

After an hour the movie has nothing related to a story and it just has all characters confusingly following each other with mistaken identities. Collectively living in a 5 star hotel, everyone keeps barging into unknown rooms trying to create some hilarious scenes for the viewers.

I realized that the idea to overcome my wife’s choice and watching this movie was a spiteful idea. In the interval we ate patties with cold drinks and found it spicier than the movie. Post intermission the biggest star of the movie Akshay vanishes from the screen for more than half an hour.

Dedanadan has loads of absurdities in its narration, which fail to convince even if you take them as a part of brainless comedy flick. I am again surprised to see another Akshay Kumar movie with the same mindless comedy. It’s now mandatory to leave our thinking brains at home to see him in silver screen. Moreover he is not entirely there in the movie.

He starts off with some good scenes with Archana Puran Singh but later gets lost in the overcrowded star cast. First time I found Paresh Rawal over acting with his intentional Punjabi ascent. Suniel shetty and Chunky Pandey are faded stars which can be substituted by new comers and even TV actors. Performance wise Sameera Reddy and Katrina Kaif were just ok.

Song ‘Paisa Paisa’ was the only best 3minutes where I enjoyed the most in the whole movie. Overall it’s just another instance of poor content with mindless script and storyline. I advice my friends and readers not to waste time and money by purchasing expensive tickets rather watch it on DVD. Post your comments and help me in improving my writing.
Posted by Ritesh Gujral at 11:34 PM 0 comments 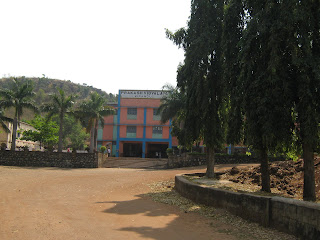 Thanks for reading and appreciating my previous post ’old lady with torn clothes’ which has created nosiness to most of you resulting lots of phone calls and mails from kirandulians all around the globe. Everybody was keen to know the name of the lady who was the central character of the real story. I know the curiosity will remain for a long time but there are certain reasons which stopped me to disclose her identity.

Today I will make my schoolmate remembers the golden old days of Kirandul. Born in the family of teachers, I was brought up with the core bookish values which are partially relevant now a days.

I remember my first day at Prakash Vidyalaya Kirandul, I with my neighbour and friend Prem Prakash who was also debuting with me on the same day joined the class room which was totally packed with new debutants. I still remember Sheetal Patel (one of my classmate from junior kg to 8th) was crying and shouting for her mother who was standing outside the class room.

I remember Roshan Minj who with his wet half pants moving all around the classroom. It was a totally new experience for me and Prem but we both were calm and cool as we have tied each others hand and feeling confident than the other kids. Second day was relatively better than the first day and kids were somewhat settled than the previous day.

I was an average student from day one till the last day in that great school. My love and respect for my teachers always motivates me and I pray for them all. I have not forgotten the special pinch by the principal “Father Kutianical’ rather missing it as every pinch has teached me lessons of life.

I also miss the bamboo stick of Shashidharan Sir, the pencil punishment by Phoney Madam, the shrill and thunderous voice of Verma Madam, The taunting and insulting Nandulkar madam, The dangerous poisoning Murmur of Clear Sister, The wiry and stormy stick of Shanta Madam, The joyful Krishnamurty Madam.

All of them were stars and brand with their typical but excellent teaching abilities and dedication towards the school and students. I badly miss my tuition teacher Jaya madam who has changed me from an introvert to a gregarious extrovert person and by her efforts only I gained confidence which is still helping me in my life. I feel proud to be an alumnus of Prakash Vidyalaya as it has given the foundation and values which are embossed on me as my instinct.

I sometime pray to God that give me rebirth in the same place with same parents ,same teachers and friends like you all. Tomorrow I will narrate journey of my four yrs in BIOP sr secondary school. Pls give your valuable comments on my blog to improve it.
Posted by Ritesh Gujral at 5:54 AM 2 comments

First of all thanks for reading my previous post and appreciating it. Frds today i want to share an incident happened with me last week in railway station which has stunned me and I am still traumatized.

I was in Raipur railway station waiting for Janshatabdi express to go my home town Bilaspur .I was on platform no.1 with disposable cup of tea in my hands feeling the arrival of winter season and enjoying sips of hot tea. I moved on to A.H.W book stall to buy Hindi edition of 'India Today' suddenly I saw an old lady whom my mind recognized but my heart was struggling hard to believe that I know her very well.

She has wrinkles all over her face and  her untidy greyish hair whispering that she has not washed them from weeks, her lean and thin body suggesting that she has not taken nutritive food from months. I was shocked when my mind processed that face and ultimately resulted that she was one of the resident of sheet quarters, Kirandul where I spended my childhood.

In the mean time I realized that my train is whistling, I have given 15 Rs. to the stall keeper and moved in the train. Coincidentally I got the window seat in front of that bookstall where this old lady was standing with her hands in begging position requesting almost everyone crossing near her for food and money. In a quandary state of mind I was thinking of her two sons who were almost 10 yrs elder than me and use to play with me when I was 5-6 yrs of age.

Lots of questions were arising in my mind regarding two of them. The five minute scenario had already disturbed me a lot and I wanted to forgot all that. In the mean time the train has given final whistle and it started moving slowly.

All of a sudden I realized that I should help her and with my laptop bag I jumped out from the train not realizing that the speed has crossed the border level. I fell down but anyhow I managed my laptop bag to land safely in the platform. In the mean time I saw two GRP constable shouting on me, I dusted my clothes and moved towards bookstall where that lady was still begging with her low voice.

I went near her and asked wheather she remembers me or not. she with her white surprised eyes has not replied me once but again I asked her, she with her andhrite ascent replied me in 'no'. I again asked her whether she is from Kirandul, this time I saw a pain scattering in her face rapidly. She with her howling low voice said yes.

I asked her about her family she again with her weeping voice told me that her husband died 15 yrs ago and her two sons don't have a space neither in their home nor in their heart for their mother. What surprised me was that when she told me one of her son is in Indian army serving as an officer and another one is an engineer in secundarabad.

I asked her about their addresses but she denies that she doesn't wants to see their faces in rest of her life. I observed  her Sari which was torn from many places and even she doesn’t have any woolen cloth to prevent her from frosty weather.

I requested her to come with me in the canteen, she slowly followed me. I ordered a veg meal for her, she asked me my name, I told her my name Rinku and asked her about my mother, she instantly replied in yes. While she was eating I saw many of the customers including the canteen manager staring me as I am an alien. I paid the bill and given five notes of 100 Rs. to old lady instructing her to buy some clothes and shawl for her.

She with her wet eyes refused to take money but I insisted her to accept as a gift from her son. She told me that she lives in railway platform in Raipur and not ready to go in any ashram or old age home. I saw the time on my wrist watch it was 8.30, I touched her feet and given my visiting card to her so that she can contact me in any need.

It’s almost five days now since this incident takes place and I am still feeling very distressed. This incident is only a reflection of what’s happening in our society and it also proves the importance of financial planning. Friends give me your valuable suggestions which will help me in improving my blogging.
Posted by Ritesh Gujral at 3:09 AM 0 comments